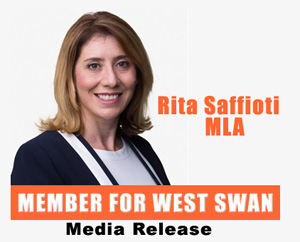 A series of major road and rail projects announced by the McGowan Government in recent weeks is a much-deserved windfall for the north-eastern suburbs.

At the election, WA Labor committed to fixing several congestion hotspots and taking a long-term, integrated approach to transport planning.

Long-standing local frustration over congestion on Lord Street and Reid Highway, plus the lack of public transport options, have all been addressed in the McGowan Government’s recent announcements.

Along with improving efficiency along the area’s busiest roads, forward planning for the rail line to Ellenbrook has already started.

These road and rail projects will not only relieve congestion; they will create hundreds of local jobs and make local suburbs more liveable places.

A $70 million allocation to carry out the final duplication of Reid Highway, between Altone Road and West Swan, was one of 17 road projects announced for the metropolitan area as part of a new $2.3 billion State-Commonwealth funding agreement.

The $2.3 billion funding agreement with the Commonwealth is also a boost for the future rail line to Ellenbrook with significant funds allocated for project development and planning.

Meanwhile, the McGowan Government also confirmed a variation of the contract for the Ellenbrook Bus Rapid Transit to build the dual carriageway New Lord Street.

There are ongoing updates associated with the NorthLink project and further information is expected soon regarding the upcoming second stage.

“The upgrade of this section has been the missing piece of the puzzle for the north-eastern suburbs road network.

“The Northlink project already includes the duplication of Reid Highway between Altone and Beechboro Roads, meaning the entire length of the highway’s dual carriageway upgrade is fully funded between the two projects.

“Over the next year we will be undertaking detailed planning for the rail line.

“The new Lord Street will also include a new park and ride facility, new stops and bus priority measures along the route that will deliver time savings to both car and bus commuters.”

“I will see what is possible, given the contract has been signed, to improve local access.”

This entry was posted in Community, Public Transport, Roads, Tourism. Bookmark the permalink.